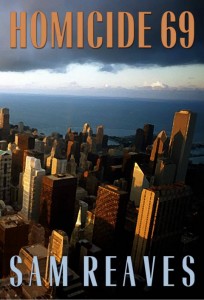 It’s the summer of 1969, and veteran Chicago homicide detective Mike Dooley is investigating the brutal torture-murder of a young woman. Eventually it becomes clear that the victim is a former Playboy Bunny and mobster’s girlfriend. Dooley suspects this is more than a sex killing, a dogged suspicion which leads him into the deep waters of mob intrigue and political corruption.

Homicide 69 is a novel not just about one crime and one detective. It is about a man, his family, and his times: As Dooley, whose own youth was sacrificed in the Pacific in World War II, scans the news for hopeful portents regarding his son Kevin, a Marine in the thick of the fighting in Vietnam, he sees the world changing before his eyes. The moonlanding, Woodstock, the Manson murders, and riots in the streets provide a backdrop for the personal and professional crises precipitated by Dooley’s stubborn refusal to give up on a crime nobody but him wants solved.