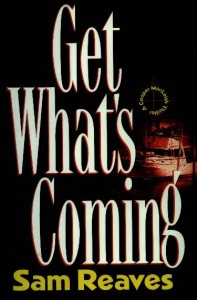 Even with his cab-driving days now only a memory, MacLeish doesn’t need to look for danger; it finds him. In Get What’s Coming, Cooper is newly married to longtime girlfriend Diana and gainfully employed as chauffeur for the very well-heeled Regis Swanson, a powerful Chicago real estate developer. Cooper seems to have found his comfort zone—until Swanson’s son Nate is shot at the Blue Angel, the hot nightclub he manages and where the elder Swanson himself is a silent partner. The cops say drug deal gone bad, but Cooper doesn’t buy it.

All too familiar with society’s ragged edges and unable to stand by as Regis Swanson’s life disintegrates, Cooper looks for a pattern in a tangled web of deception. Alone, he senses the connection between a misguided hit and a suitcase full of missing cash; alone he follows a trail of tips, near misses and allegations, which lead to drug money, some fast and loose DEA operatives, a belligerent labor union and a pair of anomic tourists named Turk and Ferocious Dick. Finally, Cooper will be forced to risk everything to confront the killer at the dark heart.