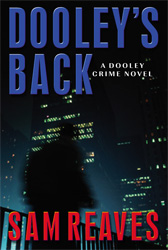 Not even a day is Dooley back, and already he’s helped a Chicago gangland punk with a switchblade in his hand and rape on his mind to a deadly fall. It’s instinct; Frank Dooley used to be a cop.

Things went bad for Dooley eight years ago, when a case of homicide prompted him to take the law into his own hands and then head south, to Mexico. His return to Chicago takes everyone with surprise, not least his older brother Kevin, now a lieutenant with the police department, and his old partner, Roy Ferguson.

Roy has had some weighty problems of his own: he’s gone through a nasty divorce, a serious gambling habit has buried him deep in debt, and an over-ambitious mob loan shark is taking the juice in police favors.

Dooley convinces Roy he should own up to what he’s done, wear a wire on the shark, and try to get back his integrity as a cop. It’s a good plan, but it goes very bad very fast. And this gritty, hard-boiled crime novel by a master of the new noir soon finds Dooley walking a taut, lethal line between the police force he deserted on one side and the Outfit that thinks it owns Roy on the other.